Meet the newest member of the DD's Family - Tony Merkel®

Hop in a time machine and dial in 1987.  A young and svelte* Tony Merkel entered the University of Texas as a Freshman Mechanical Engineering student. Unable to study due to the unbearable noise to go have DoubleDave's Peproni Rolls (because they will change your life), our hero succumbs to the peer pressure and goes to DoubleDave's for the aforementioned Peproni Rolls. Turns out the hype was not exaggerated.

I purchased the Peproni rolls and although I had never dipped anything into ranch dressing I took the advice of the many people around me (that were much too involved in my dining experience) and dipped in and took a bite.  The roof of the building opened along with the sky above as the light and angels of heaven shown and sang upon my first Peproni Roll experience. I was in.

Lets jump forward to 2012. A slightly less svelte* Tony, had been in Engineering for 20 years and had an epiphany that he didn't want to do Engineering for 20 more years. He had long envisioned that he would be the general manager of a facility or own his own business at some point, and he felt the time was ripe to conquer another long time goal, an MBA. Three years later, Tony had that MBA and three options: become an Operations Manager or General Manager of the facility he was working in, create his own company, or become a franchisee.  After some soul searching, Tony settled on franchising.

"I looked into many franchises. I did not have expertise or interest in most (all) of the franchises outside of the restaurant industry. Obviously the franchise had to be obtainable to me financially (goodbye Chick-fil-A and McDonalds) and lucrative to the franchisee. I also wanted something that was simple (didn't require unfamiliar labor i.e. Bartender, chef, etc.), wasn't over populated (goodbye Subway), didn't have fryers (I have a fryer phobia) and was something I felt like I would enjoy up to 16 hours per day. I weighed all these criteria and it always came back to DoubleDave's. I made the inquiry and Chuck gave me a call. He was friendly and informative. I met with Chuck, Joey and Christie. By the time I got home after that meeting I was sold on this group, and I knew I wanted to work with them. Chuck invited me to join the team as a franchisee and I accepted. I'm glad I did because when I went to DaveCon I was so impressed with the other franchisees and their desire to help the franchise as a whole succeed. Other owners talked to me about how they could help me get started and succeed. It was very exciting to me to see that  the franchisees did not see each other as competition but as partners for the same cause."

Born a Yankee, Tony managed to live all but one year of his life in Texas.
"I grew up in Houston from 4th grade through high school. I came to Austin in 1987 and never left Central Texas. I've lived in Leander/NW Austin since 2003."

The third of eight children, six boys and two girls (one sister on each end of the boys), Tony enjoys being part of a big family.
"My dad thought it would be a great idea to buy a 20' travel trailer and load the family up for travel across the country three weeks at a time each year.

Truth is, if you spend three weeks with your parents and siblings in a Suburban & 20' travel trailer you figure out how to make things work.

To this day our family is very close and I wouldn't trade it for anything. It is hard to understand if you don't experience the fun and laughter, understanding and heartache. As far as immediate family: I am twice divorced and raised my son from my first marriage from the age of 5. It's not what I had planned, but at the end of the day things have worked out pretty well."

So what else does Tony do to fill all that free time he used to have?
"I am an avid Longhorn Football fan and honestly a fan of all college football. I have been a season ticket holder to Longhorn Football games since 1999. My other love is music. I love live music, listening to music and playing music. My genre is anything that ends in metal. Hair, glam, pop, sleeze, heavy, hardcore punk, industrial, speed or thrash, if it ends with metal I probably like it. Everything from Poison, Motley Crue and Ratt to Anthrax, Megadeth and Slayer. And hard rock too. And whatever category you put Flogging Molly and Dropkick Murphys in. I also play drums for joy and stress relief. Over the years I have built a 24-piece drum set. It doesn't make me play any better but it's a blast to play on."

(Editor's note: Tony also has some awesome Vegas stories, so be sure to ask about those next time you see him!) 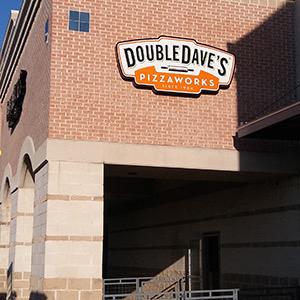 We're all really excited about having another DoubleDave's franchisee, and to finally give the folks in Georgetown a neighborhood Pizzaworks location. Tony himself states,
"I had been working in Georgetown for 17 years. I had watched the city grow and heard the laments that Georgetown lacked places to eat and drink. In addition, food delivery services were lacking. Georgetown is a town that wants to buy local, but had to venture south for good restaurant options. Their motto is "Keep Georgetown Normal." The citizens want to buy Georgetown and be Georgetown. I thought it was a great opportunity. The response from the community has been awesome. There is a lot of excitement and expectation about the new DoubleDave's. I look forward to having my own crew and running my restaurant."

After the weeks of training the next step is to get comfortable running my own restaurant and I look forward to doing that. Long-term I'm looking forward to locations two and three.